Everyone wants to score more goals.  Sure you can work on your wrist shot until your shoulder pops out of the socket or practice your toe drag until your hands bleed.  Those skills will make you a better goal scorer.  But here is a real simple way to score more goals.  However, there are two caveats:  First, notice that I said simple, not easy.  Second, while it is sure to yield more goals for your team, it may not improve your goal total.  I’ve just given you two clues.  Have you guessed it?  Are you hanging on my every word in suspense?  Well I’m no Stephen King, so I’ll just tell you…Screen the Goalie!  You’re disappointed aren’t you?  It’s like you just read that tease on the web “click here to learn this simple way to lose belly fat”, and it brought you to some scam.  Well, this is no scam.  It works.  Given how well it works, I am amazed at how few adult league players or teams do this.  But as I said, it is simple, not necessarily easy.  Let’s explore.  How do we go about this?

Rule 1:  If you want to screen the goalie, play goalie.  Huh?  What does that mean?  Simple.  Pretend you are playing goalie.  This means standing in front of the net, not off to the side.  You position yourself such that you are in the best position to stop the puck.  But why would I do that if the object is for my team to score?  Because if you are properly positioned to stop the puck, then you are in all likelihood blocking the goalies ability to see the shot coming.

Rule 2: Stay out of the crease.  It is illegal to be in the crease before the puck is in the crease, so stay out.  If your team scores and you have your skates in the crease, the goal will likely not count.  Besides, when screening the goalie, the goalie is not going to be happy.  (In fact, I’m sure I’ll get a little hate mail from our goalies for this article.)  He may even try to shove, hack or trip you (which is why I said this was simple, not easy.)  So don’t give him any justification.

Rule 3:  Keep your shots low.  This one applies to your teammates.  It’s all about trust.  Nobody wants to stand in front of a head high clapper with player gear on.  It’s downright dangerous.  So keep your shots below the knees.  This also makes it tougher for the goalie to stop.

Rule 4:  Use wrist shots instead of slapshots.  Again, this is for the shooter, not the screener.  There are a number of reasons for this one.  First, you have more control, and are less likely to take your brave teammate’s head off.  But there is another reason that most players don’t consider.  If one of your teammates is taking the goalies eyes away by standing in front of him, he (the goalie) is at a severe disadvantage.  But if he hears the crack of your stick against the ice, his ears will tell him the shot is on it’s way.  Goalies are trained to drop into a butterfly when they hear this, and take away as much of the bottom of the net as possible.  So the wrist shot is silent, but can be so deadly.

Rule 4: Face the shooter.  Again, there is more than one reason why you should follow this rule.  First, by facing the shooter, you can move as necessary, shifting left to right if the puck is passed to a different potential shooting location.  Once the shot is on it’s way, your goal is going to be to not stop it.  Rather you may want to shift left or right to get out of the way of the shot, and with a little skill and practice, you may be able to deflect it into the goal.  Another reason is personal safety.  In case you didn’t notice in the locker room when you were getting dressed, your gear is designed to protect you from the front, and to a lesser extent from the sides and back.  You paid good money for that stuff, so let it protect you.

Rule 6: Be prepared to pounce on any rebounds.  Even with a screen, it is still more likely than not that the shot will hit you or the goalie on it’s way toward the net.  That is often going to leave a rebound.  Be ready to pounce on that rebound.  You can even practice doing a quick 180 turn.  Be scrappy and be strong on your stick.

Rule 7: Wear a full cage.  There aren’t too many beer league teams where every player on the team can be trusted to keep his shot low, and it only takes one mistake or deflection to mess you up.  So if you’re one of those heroes that doesn’t wear a cage, then don’t volunteer to be the screener.  Remember, you’re playing for the Beer League Cup, not Lord Stanley’s Cup.  And while we’re on the subject of cups, you’re hopefully wearing one of those too!

Here are examples of an effective and ineffective screen.  These are from a drill that we ran at camp this past season. 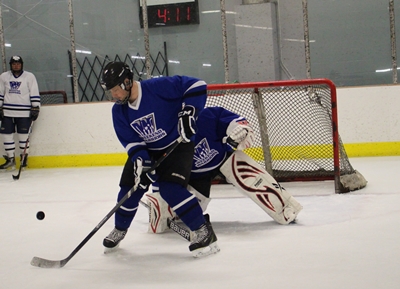 This is an excellent example of an effective screen.  The offensive player is standing directly in front of the goalie.  This takes the goalies eyes away, and forces the goalie to look around the player in order to see. This takes the goalie out of position to block the shot.  Notice that the shooter is outside of the crease, with his body facing the shooter.  His stick is on the ice, ready to make a deflection.  But even if he doesn’t get his stick on the puck, there is a good chance it will score. 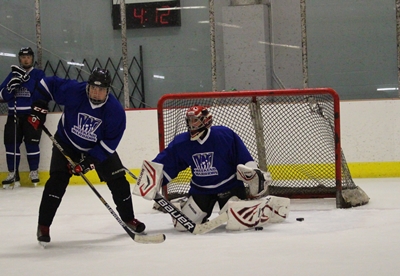 In this example, the shooter is standing off to the side.  This is the most common mistake that players make.  He is facing the shooter with his stick on the ice, which is good, but he is not blocking the goalie’s vision at all.  He is a threat to deflect the puck, but with an unobstructed view, the goalie is likely to stop it.  Further, because he is next to the goalie rather than in front of the goalie, he is actually giving his teammate less net to shoot at.  (This is not evident from this photo because the camera angle is not the same as the shooter’s angle.)

Notice the clock in these 2 photos.  The photos were taken 1 minute apart.  It is the same group, doing the same drill.  It just goes to show that this stuff takes practice to execute properly.  I will confess that the player in the upper photo has been to camp before.

I’m confident if you follow these rules, your team will start scoring more goals.  Even the best goalie is going to have trouble making a save when he can’t see the puck coming.  It causes goalies to move out of position, lose their focus, and in some cases to lose their mind.  This last point emphasizes the need for bravery in executing the screen.  You have to trust your teammate to keep the puck low, and also be concerned what the goalie might do to counter your screen.  Don’t think for a minute that they don’t receive training in how to deal with a screening player.  I know our goalie coaches teach it to our goalies.  Hopefully the ref will be observant and call anything the goalie might do outside of the rules.  Double bonus score if you get the goalie to take a penalty!

Give it a try and let me know how it works for your team.

Posted in Blog.
Get Newsletter