Prologue:  You play in a beer league, and you want to get better, so you go to hockey camp.  You learn all kinds of cool new stuff that you never knew before.  You leave camp so excited, and you can’t wait to go home and tell all your teammates.  You’re going to teach them all of these wonderful new concepts you learned from our amazing coaches.  You show up in the locker room 30 minutes before your next game. All of the guys are there extra early.  You bring a whiteboard and marker, and begin to explain all that you learned.  Your teammates listen intently, absorbing all of your newly acquired knowledge.  Then it’s game time.  You hit the ice, and your teammates are like entirely new players, executing everything you’ve taught them to perfection.  You win the game against an opponent you’ve never beaten before, and your teammates carry you off the ice on their shoulders.  You’re a hero!

Hey buddy, it’s nice to have dreams, but seriously, if that sounds anything like your team, then sign me up to play with you guys next season.  The truth is that you are going to learn a lot at hockey camp, and you will leave a much better player.  But the fantasy ends there.  There’s no way the knuckleheads in most locker rooms are going to listen, much less implement anything that you have learned.  So rather than teach you systems that the entire team needs to execute to pull off, we are going to teach you tactics that you can implement on your own.  I will share some of those tactics in this article.

Here are 3 tactics you can use to play better defense: 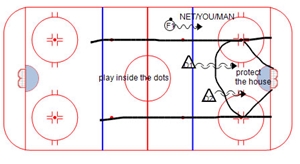 The “Guts of the Ice” are the area of the ice between the dots, for the entire length of the ice.  Of course, we’re not so worried about defending when we are in our attacking zone.  But as we retreat from our offensive blue line, back through the neutral zone and into our defensive zone, we want to keep the attacking player to the outside of the dots.  So we are playing inside the dots, and will use our stick and body position to steer the attacker to the outside.  As Coach Figsby likes to say, if they score from out there, we’ll get a new goalie.  Does this mean we never go into the corners or the outside?  No, of course not.  But first defend the guts.  Once you have established that you have support, then you can challenge along the boards or in the corners.  Another thing to think about, is that you always want to keep yourself between the attacker and your net.

2) One Hand On Your Stick

When we don’t have the puck, we are on defense.  And when we are on defense, we should have one hand on our stick at all times, unless we are actively engaged in a battle for the puck.  Too many players spend a majority of their time on the ice with two hands on their stick.  This may be because some coach in Mini mites yelled “Two hands on your stick!  Two hands on your stick!”, which scarred the player for life.  But when we hold our stick with just one hand, we gain several advantages.  First, we make ourselves bigger, making it more difficult for a player to get around us.  Second, we have the ability to sweep our stick and block up potential passing lanes.  Third, we have a greater reach should we decide to extend and make a poke check.  And most importantly, we can go stick on puck, also known as stick on stick or blade mirroring.  For a more detailed description of this tactic, see my previous blog article on Blade Mirroring.  Now if you are in a battle for a puck with an opponent and need to be strong on your stick, that is the time to have two hands on your stick.  The same is true if you are engaging with an opponent whose stick you wish to lift.

3) Steer players to their backhand

Even the best shooters in the NHL are less dangerous on their backhand than on their forehand.  The same will be true for players in your league.  I don’t know anyone who has a better backhand than forehand shot, and the same goes for passing as well as shooting.  Not to mention that their vision is more limited on the backhand.  So try to steer a player to his or her backhand.  How do you do this?  Well first, you’ll need to recognize whether she is a lefty or a righty.  It will take some practice, but after a while you will be able to recognize it at game speed.  So then how do we force them to their backhand?  Simple, we influence them with our stick and body position.  Use your stick and/or body to take away their forehand side, and give them more room to the backhand.

Now you ask, what if steering him to his backhand is toward the center of the ice?  Should I steer him to his forehand to the outside, or backhand to the middle?  That is a good question, and one that comes up at camp once in a while.  There is no hard and fast answer.  Hockey is a fluid game, and almost everything is situational.  With that said, my preference would be to keep the player from the center of the ice over shooting hand dominance.  It’s also easier, as you don’t have to figure out if the player is a lefty or righty as he is coming at you.

I hope these 3 tips will help you play better defense.  Of course, there are many more skills to learn when it comes to playing good defense.  Things like skating, passing, puck handling, communication and gap control to name a few.  We won’t attempt to cover too much in one article, but perhaps another day.  In the mean time, come to a camp, and we’ll teach you some of these skills on the ice as well as in the classroom.

Posted in Blog.
Get Newsletter